Jin Shin Jyutsu is an ancient Japanese healing-art and is described as a physio-philosophy. It was discovered again after many generations by Master Jiro Murai, who passed it on to Mary Burmeister, who started teaching in the West in 1960s. According to the philosophy all life is a direct result of the ever present universal energy. Ailments or diseases are caused by a disturbance in this energy flow. It is simply done by placing fingertips over clothing on specific “safety energy locks”, areas of the body, to harmonise the energy flow. Unlike some other healing arts, Jin Shin Jyutsu is non–invasive and painless. It doesn’t involve massage, manipulation of the muscles or bones nor the use of drugs or needles. It is sometimes described as ‘acupuncture without needles’, yet its philosophy presents a way to get to know oneself body & mind.

Jin Shin Jyutsu brings balance to the body’s energies allowing the body to function properly, feel better and heal more quickly. Jin Shin Jyutsu promotes optimal health and well being; facilitating our own healing capability. It is a valuable complement to conventional healing methods, including relaxation and reducing the effects of stress. To read more please check this

To read more about Jin Shin Jyutsu and its philosophy how to learn about self help use, I refer to the book:
Original Jin Shin 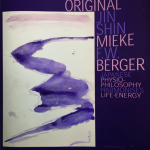